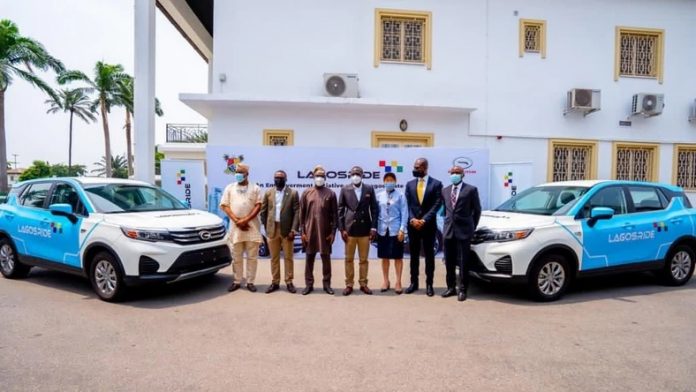 Lagos Ride is an e-hailing taxi service, and is launched to rival private companies in the same business, such as Uber and Bolt.

The state governor unveiled the scheme on Thursday, when he signed a partnership agreement with CIG Motors Company Limited.

In a statement by the governor Babajide Sanwo-Olu, he stated that the service will have 1,000 units of brand new Sport Utility Vehicles (SUVs) deployed within the metropolis.

“The scheme is in fulfilment of our desire to give residents better transportation choices. The modern ride service is one of the state government’s socio-economic intervention programmes, which will be professionally managed in line with global best practices,” Governor Sanwo-Olu said.

He also added that the service will fully take off within the next six months.

The Cooperative Society in the Lagos Ministry of Wealth Creation and Employment will give operators brand new SUVs, which is worth about ₦10m in today’s market, for a period of four years.

The operators would then pay in monthly installments, after which, they will then have the opportunity to fully own the cars at the end of the credit tenure.

The governor noted that the service is a social intervention programme, and was initiated to create jobs and economic opportunities for Lagos residents.

He said the service has been structured along a profitability model, and designed to be self-sustaining for expansion and growth.

The agreement, which is for the establishment of a Vehicle Assembly Plant in Lagos, would have the company produce different classes of brand new cars in the next 24 months.

“I urge other stakeholders and private investors to collaborate with us to sustain the scheme. We have the political and administrative will to ensure business survives in Lagos,” the governor said.

Diana Chen, Chairman of CIG Motors Company Limited, added that the automobile company will sponsor 50 students for a two-year engineering training in a vocational school in China to strengthen its partnership with Lagos.