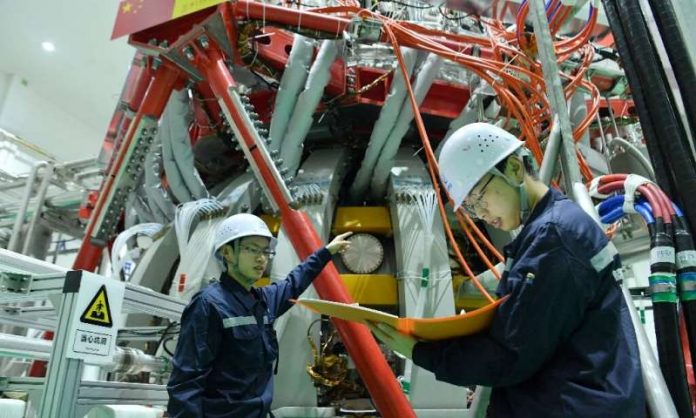 China has successfully turned on its widely talked about “Artificial Sun” nuclear fusion reactor for the first time, according to AFP.

The nuclear reactor project is located in southwestern Sichuan province, and completed late last year. The reactor is often called an “Artificial Sun” because of the enormous heat and power it produces.

The HL-2M Tokamak reactor, which is China’s largest and most advanced nuclear fusion experimental research device, could someday generate power without running the risk of a nuclear meltdown, or emitting greenhouse gases.

Although, the technical challenges are still quite steep, the nuclear reactor is designed to generate power by fusing atoms together rather than breaking them apart. Following that path, scientists hope that the device can potentially unlock a powerful clean energy source.

According to People’s Daily, the HL-2M Tokamak reactor uses a powerful magnetic field to fuse hot plasma and can reach temperatures of over 150 million degrees Celsius, which is approximately ten times hotter than the core of the sun.

“The development of nuclear fusion energy is not only a way to solve China’s strategic energy needs, but also has great significance for the future sustainable development of China’s energy and national economy,” said the People’s Daily, and quoted by phys.org.

The news of China’s Artificial Sun poses a new step at advancement in clean energy generation, although it is quite expensive, it still gets a lot of attention and funding from concerned organizations.

Nuclear fusion is a different and more challenging physics from fission. Fusion is considered the Holy Grail of energy and is what powers our sun. It merges atomic nuclei to create massive amounts of energy.

Fission on the other hand, splits atoms them into fragments, and is the process used in atomic weapons and nuclear power plants.

Unlike fission, fusion does not create radioactive waste, and carries less risk of accidents or the theft of atomic material.

Despite the cost and challenges involved in the creation of such technology, scientists are already working on the International Thermonuclear Experimental Reactor (ITER), which would be the world’s largest nuclear fusion research project.

The ITER is an international collaborative effort between 35 countries, and the project is based in France. It is expected to be completed in 2025, and cost about $22.5 billion.