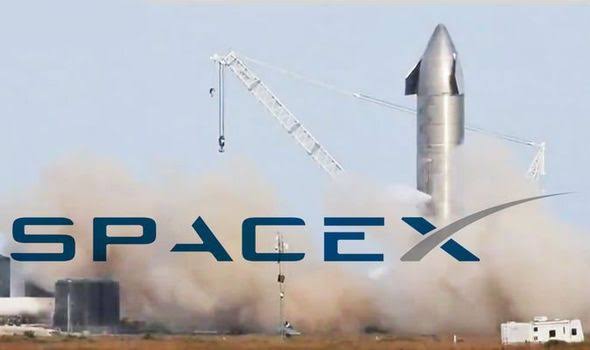 Earlier this week, SpaceX tested one of its Starship prototypes – SN9. The space shuttle was launched successfully on Tuesday, however, its landing was unsuccessful, as it exploded into a ball of fire.

The launch of the spacecraft was done at a launch station at Boca Chica, Texas, and was livestreamed.

SpaceX plans to carry humans and 100 tons of cargo on future missions to the moon and Mars.

After the unfortunately incident of the explosion, the private space company was quick to emphasize that perfection was not the point of the test.

John Insprucker, SpaceX’s principal integration engineer, stressed that the company had successfully lifted its giant experimental vehicle to an altitude of 32,800ft (10km), before it glided out of control, and exploded on impact on its landing pad in Boca Chica.

The spaceship (SN9) was 160ft tall and 30ft wide. It is the ninth Starship prototype to be launched.

“Again, we’ve just got to work on that landing a little bit,” Insprucker added.

The Federal Aviation Administration (FAA), which regulates rocket launches, announced that it will oversee an investigation into why the prototype crashed.

“Although this was an uncrewed test flight, the investigation will identify the root cause of today’s mishap and possible opportunities to further enhance safety as the program develops,” an agency spokesman said in a statement.

Last week, SpaceX and FAA were in a standoff. SpaceX had filled the propellant tanks of this prototype of SN9 and looked ready to launch, but the rocket had to stay on the ground due to FAA approval not coming forth.

Read also: Super-Intelligent AI Would Be Impossible For Humans To Control, Scientists Warn

Mr. Musk expressed his frustration on Twitter, he described the part of the FAA that oversees SpaceX as “fundamentally broken.”

“Their rules are meant for a handful of expendable launches per year from a few government facilities. Under those rules, humanity will never get to Mars.”

The FAA finally gave approval for the launch late on Monday. It also revealed that the launch of SN8, in December, occurred without the agency’s approval.

Elon Musk’s company has become successful in the rocket launching business, and is now one of the world’s most valuable privately held companies.

SpaceX’s Falcon 9 rockets have become a dominant workhorse for sending satellites to orbit. It routinely transports cargo to the International Space Station (ISS), and has lifted NASA astronauts to the ISS twice in 2020, with more trips planned this year.

Elon Musk believes that his company is just a few years from sending a Starship to Mars, however, this has left many skeptical, especially, with the series of explosions trailing the landing of the test spaceships.